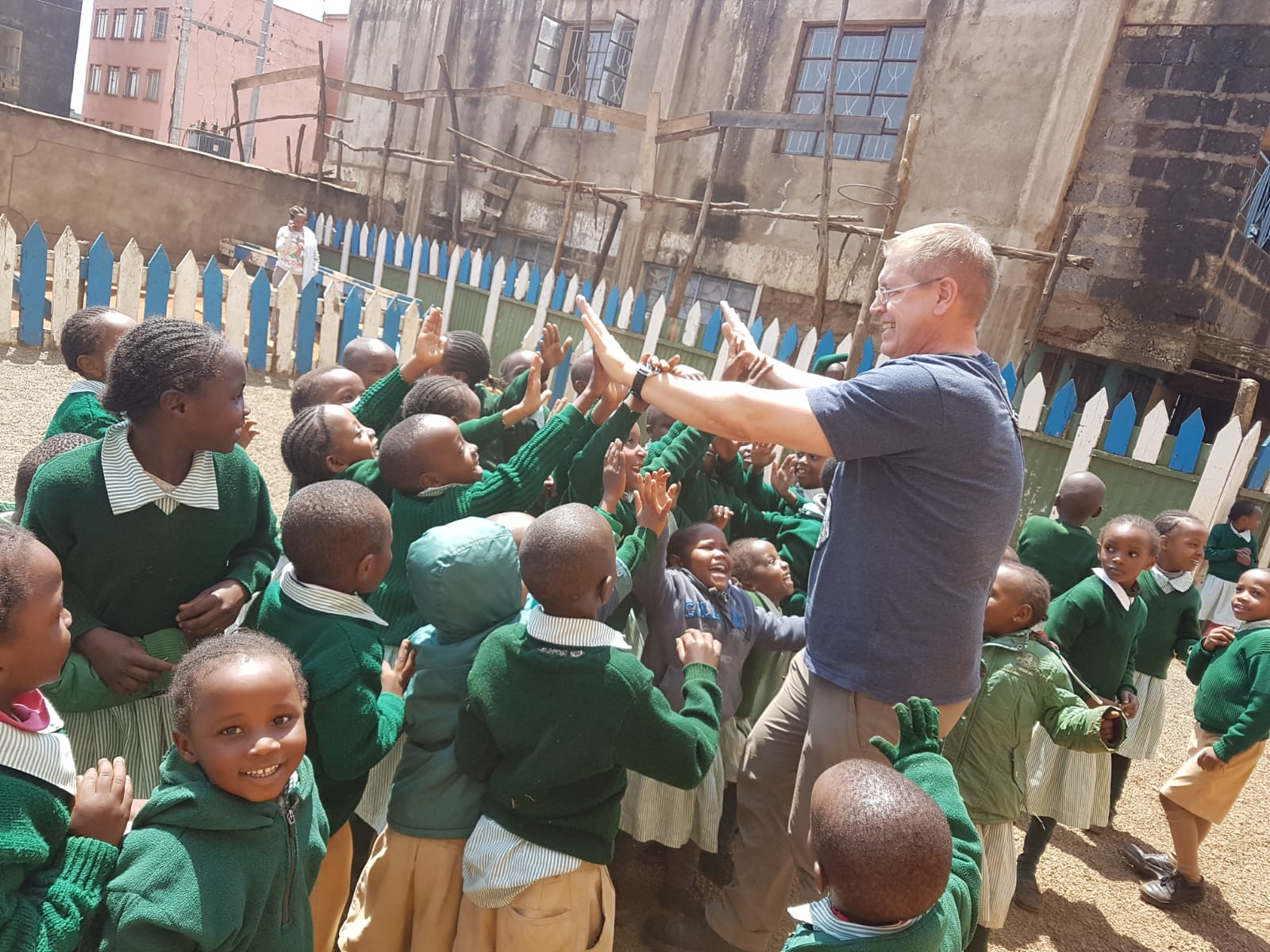 Frank’s visit went well and we managed to visit all the families including the Karatina Children’s home. When we got there the home mother was not around so we waited for her for a few minutes then she came and found us in the office.She was overly nice to us .We even took a cup of tea together then she offered to take us to the school to visit the kids. It was around lunch time so the twins had come for lunch so we got a chance to interact with them at the home, later we went to the school to see the other four kids. The home mother had to first ask for permission from the headteacher then we were allowed to see the kids.They were very happy to see us.later we took photos and left for nyeri.

The first family we visited was Kagori’s family which was the very first family to be absorbed by HFN. Initially it was a complete family of a very old man married to a younger woman and they had seven kids together whom he was not able to take care of. Kagori died years ago and then much later his wife got married again and left her kids behind. So his first born son has been taking care of his siblings until another german organization took the children in and started supporting them. So that’s where the people from the german home took me to the police because of visiting the kids in the school and taking photos. They claimed that they do alot for the kids than us and also he said that there were people out there who take photos of the kids then use them to get funds from abroad so he just wanted to clarify that we are not among them. Eventually Frank clarified everything to him and he asked us to stop our little support to the kagori family because they can fully support them now.

The next family we visited was Josephine’s family we went to her house and she welcomed us, gave us tea and sweet potatoes then later we visited her kids who are in different schools. One of the kid’s walks for long distance to get to school and Frank suggested that it would be nice to buy him a bicycle but his mum said that we would rather help her pay for his school fees because she struggles alot. Frank was so kind and gave her some money and she was really grateful

Next we visited catherine wanjiru’s family. We met her in town where her kids go to school.We took photos and she was very thankful for the business we opened for her She is still hawking second hand clothes in town.

We proceeded to Wandia’s house and Frank remembered her face.He had seen her on our website with chicken. She recently moved to a new house because the place she lived before was not so nice and she struggled to move around with her wheelchair especially when it rains and it gets so maddy.she also sold the chicken because the landlord in the new house doesn’t allow tenants to rear chicken in the compound.Frank asked her if she would love to start another business and she said yes.. She said she would love to start selling charcoal by the roadside and he was so kind he gave her 2000 shillings to start off the business.

The next family we visited was Maryann and Kevin. They were happy to have us in their home. They gave us food so basically that’s where we had our supper. Maryann’s legs are getting better by the day .

After visiting Maryann and kevin we had to take a rest because it was already too late and we remained with two more families in nyeri and we decided to visit them the next morning before proceeding to Nanyuki.

On wedenesday morning we went to Wanja migwi’s family. She was very happy to see us.She was even spitting on us as a sign of blessing us for all the help she has been getting for all those years. She welcomed us and she offered us tea. Then she started singing and dancing as a sign of happiness. Initially when we took her in she was taking care of her three grandchildren who were left behind by her two children who died of HIV. Now the grandchildren live in Nairobi with other relatives because Wanja is now too old to take care of them. Frank suggested that maybe we could get her eye glasses since she cannot see properly due to her old age.

Next we went to Mary Wairimu’s home who is a beneficiary of our sustainability projects. Her shop is still running and her grandsons are operating it. It was very cold and we found her still in bed. Frank suggested that maybe we could get her some gloves and nice pillows. One of her grandsons was around operating the shop and he would also love to set up a barber shop just next to the shop as an addition to their source. They also have a cow whose milk they sell at the shop. We took photos and left.

It took us one hour to get to Nanyuki. The first family we visited was Esther Nanyiro’s, who is blind. She welcomed us and she was in the company of her daughter who is married. We didn’t stay for long we left and went to the school where her two sons go to. The headmistress allowed us to see them and to talk to them.Then took photos and left.

Next we met Editta who is a single mother of four daughters but two are married. Now she is left with two to take care of but we only got to see one in school. We didn’t get to see the other one because her school head teacher denied me permission to take Frank and Lucky to the school. Initially Editta was employed as a house help but now she is jobless and would love to start a chicken project.

We later went to hope and home.The home mother was not around she was away in Nairobi for treatment. She’s been sick for a while now, so we talked to the person in charge and he allowed us to see sharon and mark. They were happy to see us. He took us to see where sharon and mark sleep then we took photos together. Frank gave the guy in charge some money for sharon and mark to buy them something nice.

Next we went to Martin’s school. Talked to the headmistress then she took us to Martin’s class where we met martin and his teacher. She showed us Martin’s books just to see how much he has greatly improved. We took photos then later we left.

We went to town and had lunch together.
It was really nice to spend time with Frank and Lucky and also to take them through our projects. They are so kind.

I was really happy to have one of the HFN donors visiting us. Thank you so much.

I have attached some photos.
Kind Regards
Shiro